Most PopularNews
Graphene sees the light: sheets of carbon one atom thick could be used in PV cells

Graphene sees the light: sheets of carbon one atom thick could be used in PV cells 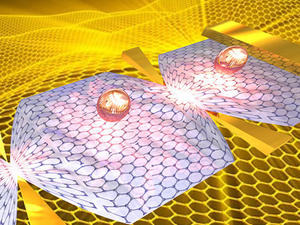 Graphene, a one-atom-thick sheet of carbon that is extremely strong and conducts electricity well, is the thinnest material ever made. Researchers believe that it could be used as a transparent electrode in photovoltaic cells, replacing a layer of indium tin oxide (ITO) that is brittle and becoming increasingly expensive.

Wee Shing Koh of the A*STAR Institute of High Performance Computing in Singapore and co-workers have compared these two materials. They found that graphene outperforms ITO when used with solar cells that absorb a broad spectrum of light.

The wavelengths of light from the Sun have a range of intensities and deliver varying amounts of power. To maximize a photovoltaic device’s performance, its transparent electrode should have a low electrical resistance, while also transmitting light of the right wavelengths for the cells to absorb.

Square sheets of graphene produced by today’s chemical vapor deposition technology have an electrical resistance roughly four times that of a typical 100-nanometer-thick layer of ITO. Although adding more layers of graphene reduces its resistance, it also blocks more light. Koh and his co-workers calculated that four layers of graphene stacked together had the best chance of matching ITO’s performance.

Graphene has one key advantage over ITO: it allows more than 97% of light to pass through to the solar cell beneath, regardless of its wavelength. In contrast, ITO tends to block certain wavelengths more than others. Four-layer graphene is slightly more transparent at near-infrared wavelengths than ITO is, for example.

Koh and co-workers estimated how each material would affect a flexible organic solar cell that absorbs light with wavelengths of 350 to 650 nanometers. They found that four layers of graphene delivered only 92.3% of the power of an equivalent ITO electrode. When paired with another organic photovoltaic device that operates from 350 to 750 nanometers, thus making it more effective at absorbing near-infrared light, graphene almost matched ITO’s capabilities.

The researchers concluded that graphene would be ideally suited to photovoltaic cells with a very broad absorption range, such as a recently developed organic solar cell that can harvest light from 350 to 850 nanometers.

“With the refinement in the graphene manufacturing process, it would be possible for the sheet resistance of graphene to be an order of magnitude lower than the current state of the art,” says Koh. This would allow just one or two sheets of graphene to beat ITO on both conductivity and transparency, making graphene transparent electrodes much more widely applicable.

(The above story is based on materials provided by The Agency for Science, Technology and Research).